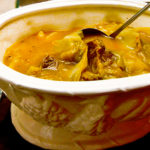 Haitians throughout the world make Soup Joumou every New Year’s Day to celebrate the independence of Haiti (January 1st, 1804).   Haiti cast off the bonds of slavery and declared its freedom from France in 1804, making history as it set a precedent and became the first post-colonial black-led nation in the world.  To read the declaration Declaration of Independence – (click here – also available in French).  Prior to Haiti’s independence the slaves were forbidden to eat a certain soup as it was determined to be too fine to be consumed by the slaves.  Enjoying this fine soup, now called Soup Joumou, was one of the first actions of freedom taken as independence became a reality for Haiti on January 1st, 1804.

Soup Joumou is a celebratory meal consumed together with family and friends in the spirit of overcoming incredible challenges, achieving success, and enjoying the  positive offerings ahead.  A delicious meal for all.  Happy Independence Day!  Happy New Year!

Enjoy with family and friends.  Savor the spirit of new accomplishments. The future is bright!

Dudley Alexis prefers hot pepper in his soup. Alexis is the South Florida filmmaker behind the documentary “Liberty in a Soup,” which was featured at last year’s Miami Film Festival and explores the relationship between the traditional soup and Haitian history.

To pass the torch forward with a tax deductible contribution see our donation page or contact us at info@leflambeau-foundation.org.  Le Flambeau Foundation Inc. is a non-profit 501(c)3 entity .