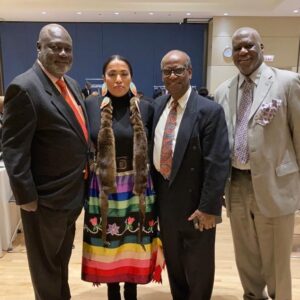 The DuSable Heritage Association hosted its annual gala event on March 5, 2022.  Le Flambeau Foundation President Jean St.Lot-Gervais participated in the festivities held in Chicago.  The event is held each year on the weekend nearest to the city’s incorporation anniversary, March 4th—also known as “DuSable Day”.  This year’s gala was held at the University of Illinois Chicago (UIC). 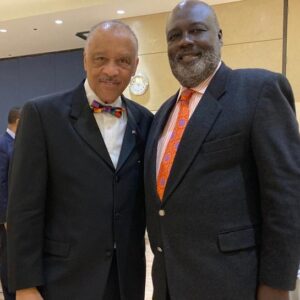 The DuSable Heritage Association (DHA), founded in 2000, has saluted the growing efforts to honor the Haitian-born settler Jean Baptiste Point du Sable (born in Saint-Marc, Haiti), who arrived in the region in the 1780s as its first non-Indigenous settler and known as the founder of the city of Chicago.

The DHA recently established a partnership with UIC to offer scholarships in honor of DuSable and his Potawatomi wife Kitihawa.  The partnership includes the new DuSable Scholars Program, benefiting Black and Indigenous students pursuing STEM disciplines. The scholarships provide  a full ride and stipends for undergrad through to graduate school at UIC.  The first cohort in the program, consisting of 19 students, were honored at the gala – with many carrying GPA’s of 3.8+.

Le Flambeau Foundation has had a relationship with DHA for the past five years+ as we share a commitment to educating our talented underserved youth.