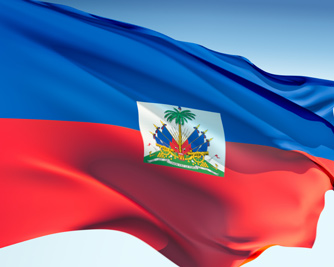 Haitian Flag Day is observed on May 18 in Haiti and in a number of U.S. cities with large populations of Haitian Americans. Many Africans of the diaspora, regardless of their ancestry, also join in the holiday celebration, because it commemorates the slave revolt in Haiti that led to the country’s independence from France.  This also prompted slave uprisings in America.

During the 1700s in the French West Indies colony of St. Domingue (later renamed Haiti), a few French families owned huge sugar plantations and brought in more than one half million slaves from Africa to work the fields. As in some other parts of the Western Hemisphere, many plantation owners treated slaves brutally, often working them to death.

In 1789 a revolution broke out in France, and the ideals of liberty and equality expressed by the revolutionaries quickly spread to the colonial plantation owners and merchants, who demanded freedom from French rule. Free blacks and people of mixed race wanted social justice. And slaves were ready to fight for their freedom.

The most successful slave uprising in history began in August 1791. A former Creole slave, Toussaint Louverture (too-SAN loo-vehr-TYOOR), was a leading figure in the revolution. He trained an army of slaves who fought against tens of thousands of French, Spanish, and British soldiers. An estimated 350,000 people died, most of them slaves, in the Haitian Revolution before independence was won in 1804.

The French captured Toussaint in 1802 and sent him to France, where he died in prison in 1803. Two other Haitian leaders took up the fight: Jean Jacques Dessalines and Henri Christophe.

Creation of the Holiday

When Dessalines and other leaders decided to march on what is now Port-au-Prince, they wanted to carry a flag that would represent their troops. On May 18, 1803, they pieced together a design for the official flag. Since then, May 18 has been known as Haitian Flag Day.

The design of the new flag began with the French flag made up of blue, white, and red bands. The white band was removed to indicate that the French no longer controlled the colony. A woman named Catherine Flon sewed the new flag together, using vertical bands of blue and red cloth. Blue represented blacks and mixed-race people, and red symbolized their blood.