Thank you Congressman John Lewis for your sacrifices and for the love you have for humanity.  We are all God’s creation and all bleed one blood.  My condolences to the Lewis family.  The spirit of John Lewis lives on. 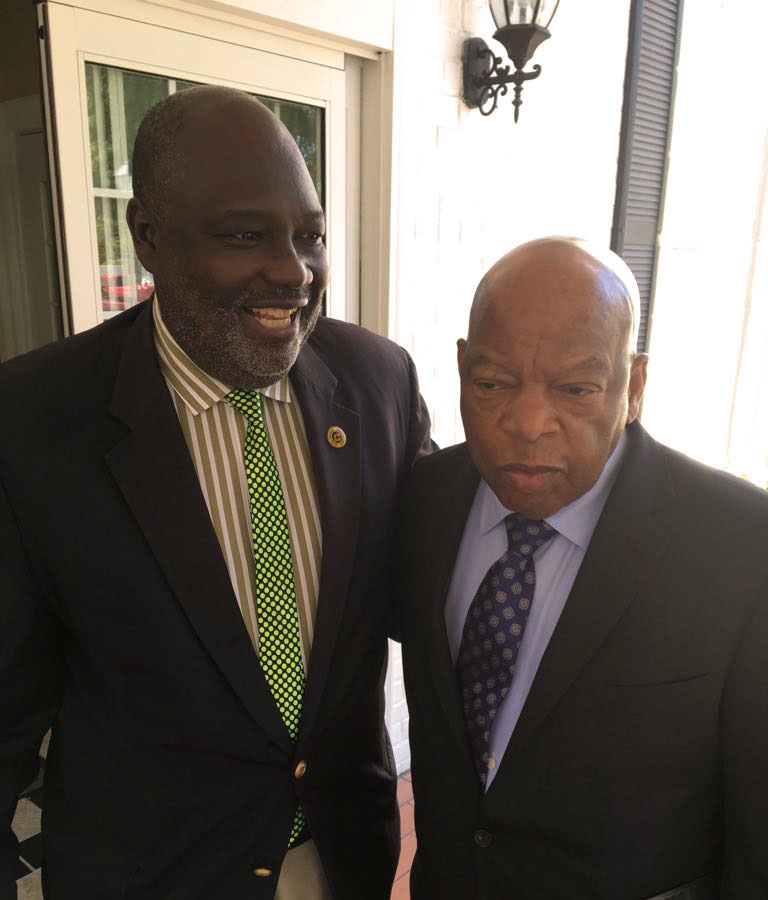 Le Flambeau Foundation President Jean St.Lot-Gervais is attending the graduation of  Scholar Danice Lefranc at Berea College.  St.Lot-Gervais had a chance to speak with Congressman John R. Lewis who will be the keynote speaker for the Class of 2017 commencement ceremony.

The Berea College Commencement will take place at 2:00pm. today – May 7th, 2017.   Countdown to graduation!

Berea College Commencement Address to the Class of 2017
The Honorable John R. Lewis

Congressman John R. Lewis is the U.S. Representative of Georgia’s Fifth Congressional District. He has long served as a guiding light for the Civil Rights Movement and continues to speak powerfully for the powerless. He has rightly been called “the conscience of the U.S. Congress.”

Born in Pike County, Alabama, near the town of Troy, in 1940, Lewis was inspired by the social activism of the 1955-1956 Montgomery Bus Boycott. A graduate of the American Baptist College, Lewis later earned a Bachelor of Arts in religion and philosophy from Fisk University. During his college years, he became committed to nonviolent activism and helped to organize sit-ins at segregated lunch counters, where he was arrested for the first of more than 40 times for civil disobedience. He also participated in the 1961 “Freedom Rides,” which challenged segregated facilities in southern bus terminals.

In 1963, Lewis became chair of the Student Nonviolent Coordinating Committee, leading large voter registration drives and helping to organize the 1963 March on Washington, which later prompted passage of the 1964 Civil Rights Act. On March 7, 1965, millions of Americans were shocked to see
televised footage of him and 600 other peaceful civil rights marchers beaten as they left the Edmund Pettus Bridge in Selma, Alabama; Congressman Lewis suffered a fractured skull. As a result of “Bloody Sunday,” he spearheaded a later march from Selma to Montgomery as a peaceful protest against the suppression of voting rights in the state of Alabama, which spurred passage of the 1965 Voting Rights Act. Lewis worked closely with Rev. Dr. Martin Luther King, Jr., and other Civil Rights leaders in that lengthy and memorable fight for freedom and equal rights.

Congressman Lewis later served as the director of the Voter Education Project, where he helped to expand the number of registered minority voters by almost 4 million. In 1981, he began his formal career in politics when he was elected to the Atlanta City Council. In 1986, voters sent him to the U.S. House of Representatives. To this day, he continues his crusade for justice in the halls of Congress and around the world.

Mr. Lewis has received numerous honors, including more than 50 honorary degrees, the Presidential Medal of Freedom, the NAACP Spingarn Medal, and the only John F. Kennedy “Profile in Courage” Lifetime Achievement Award ever granted. He is also an award-winning and best-selling author. He married Lillian Miles in 1968, who died in 2012. They have a son, John Miles Lewis.