Haiti played an important role in black history – serving as the spark that fueled freedom in Haiti, in the U.S. and throughout the world.  An important read is The Black Jacobins.  This powerful, intensely dramatic book is often described as the definitive account of the Haitian Revolution of 1794-1803, a revolution that began in the wake of the Bastille and became the model for the Third World liberation movements from Africa to Cuba.  Provided below is information on the original book and the recently published Reader.

Overview of the Original Book, Amazon.com

This powerful, intensely dramatic book is the definitive account of the Haitian Revolution of 1794-1803, a revolution that began in the wake of the Bastille but became the model for the Third World liberation movements from Africa to Cuba. It is the story of the French colony of San Domingo, a place where the brutality of master toward slave was commonplace and ingeniously refined. And it is the story of a barely literate slave named Toussaint L’Ouverture, who led the black people of San Domingo in a successful struggle against successive invasions by overwhelming French, Spanish, and English forces and in the process helped form the first independent nation in the Caribbean. 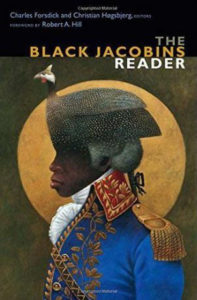 Containing a wealth of new scholarship and rare primary documents, The Black Jacobins Reader provides a comprehensive analysis of C. L. R. James’s classic history of the Haitian Revolution. In addition to considering the book’s literary qualities and its role in James’s emergence as a writer and thinker, the contributors discuss its production, context, and enduring importance in relation to debates about decolonization, globalization, postcolonialism, and the emergence of neocolonial modernity. The Reader also includes the reflections of activists and novelists on the book’s influence and a transcript of James’s 1970 interview with Studs Terkel.

To read more about the analysis “Reader” (click here) – Published 2017