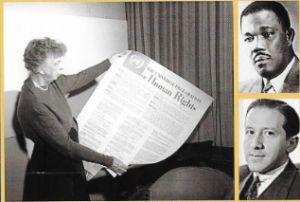 The Universal Declaration of Human Rights 70th Anniversary and the role that Haiti and Cuba played, was celebrated on December 10th, 2018; hosted by FUI Digital Library of the Caribbean in collaboration with Le Flambeau Foundation. The monumental achievements of Senator Emile Saint-Lôt representing Haiti as a founding member of the United Nations and later serving as rapporteur and co-signatory for the Universal Declaration of Human Rights on December 10th, 1948, were highlighted for the education of our current and future generations.   To read the UDHR (in English) (French) (in Kreyol). 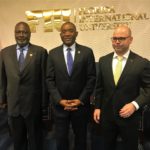 The program was an educational dialogue with and for, our youth. Highlighted were the historical achievements of our forefathers with a spotlight on the role our youth will play in determining the future. Featured was a lively panel discussion with Universal Declaration of Human Rights experts Mr. Jean St.Lôt-Gervais, the son of Senator Emile Saint-Lôt and the president of Le Flambeau Foundation; Mr. Daniel Pedreira, an expert on the history of Cuba; and Dr. Dimmy Herard, a historian focused on Haiti. The discussion was followed by a THE SPARK of Le 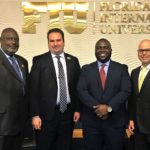 Flambeau youth exchange between students from Miami Edison and perspectives from youth in Cap-Haitien Haiti; focused on Human Rights.  We were also honored with a visit from special guest Commissioner Jean Monestime.

THE SPARK of Le Flambeau is a Le Flambeau Foundation educational exchange program in its eight year, in which youth in Haiti discuss various topics in English, often exchanging views with students in the U.S.  For this special Universal Declaration of Human Rights 70th 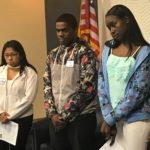 Anniversary Celebration session, three students from Miami Edison presented pieces prepared by youth from earlier sessions of THE SPARK of Le Flambeau program held in Cap-Haitien, Port-au-Prince, and one from a session held at Miami Edison. Each youth presenter read a piece, shared their perspective on the topic, and stimulated discussion from youth in the audience. Solutions were identified which include – 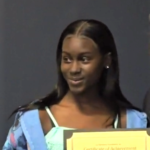 As is the tradition of THE SPARK of Le Flambeau, recognition and prizes were awarded at the end of this special session. Winners were selected by the judges. The three student presenters – Humbert, Zarya, Katherine – were awarded certificates of achievement signed by the son of Senator Emile Saint-Lôt and president of Le Flambeau Foundation, Mr. Jean St.Lôt-Gervais. The grand winner, Zarya, received a Samsung Tablet to support her educational growth and human rights achievements ahead. 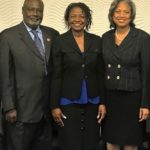 A special note of appreciation is extended to Ms. Sherley Louis, who was a past teacher participant of THE SPARK of Le Flambeau at Edison Senior High and who assisted in the planning of this special session.

The Universal Declaration of Human Rights 70th Anniversary was celebrated on December 10th 2018 in Miami and throughout the world, including Haiti. The leadership of Haiti 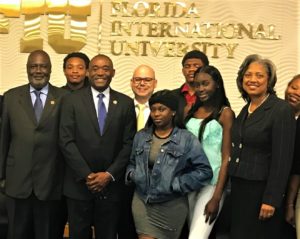 honored the remarkable contributions of Senator Emile Saint-Lôt. The future will be led by our youth. Judging from the engagement demonstrated on this day, our future stands to be exceptionally bright.

About Le Flambeau Foundation. Le Flambeau Foundation serves as a portal providing youth of Haiti with educational opportunities that will prepare them to rebuild and lead the country’s transition from poverty to prosperity, with dignity. Activities include preparatory educational programming such as THE SPARK of Le Flambeau and the awarding of college scholarships to youth in Haiti.  The foundation is a Wisconsin incorporated 501(c)3, entering into its twelfth year. www.leflambeau-foundation.org. 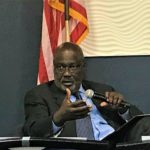 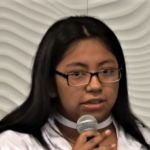 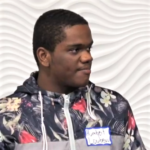 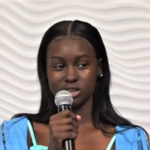 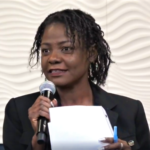 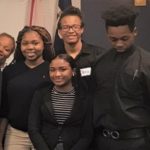 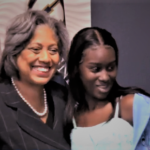 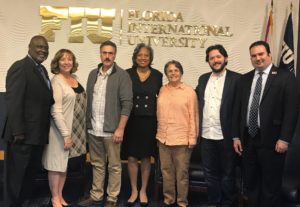 A program was also held in Haiti.  The Republic of Haiti held a ceremony in honor of Senator Emile Saint-Lôt and the 70th Anniversary of Universal Declaration of Human Rights.  To learn more and see photos (click here).