On December 10th, 1948 the Universal Declaration of Human Rights (UDHR) was adopted by the UN General Assembly in Paris during its 183rd plenary meeting. Haiti was one of the 48 countries that voted to pass the UDHR.  Ambassador Émile Saint-Lot, a founding father of Le Flambeau Foundation, served as rapporteur and the Haiti signatory – joining U.S. First Lady Eleanor Roosevelt and the remaining countries in ratifying the document.  Today there are 192 signed countries for UDHR.

Starting December 10th of this year, a year-long campaign will be launched by the United Nations as we enter the 75th year. The campaign seeks to shift the needle of understanding and action towards greater knowledge of the universality of the UDHR and the activism associated with it.  The theme is “Freedom and Justice for All”.  To learn more about the UN campaign click here. 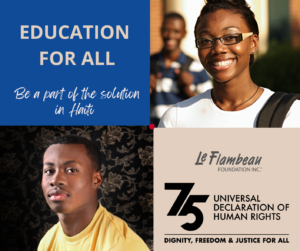 EDUCATION is a human right.  “Education is not only a fundamental human right, but also a prerequisite for everyone to realize human rights for themselves, individually and personally, as well as in the community and society to which people belong.”  Le Flambeau Foundation provides educational programming and scholarships for youth in Haiti as we are a part of the movement started 74 years ago by a father of Le Flambeau Foundation – Ambassador and UDHR signatory Mr. Émile Saint-Lot – and 47 other countries.   Education is freedom and elevation for youth in Haiti.  The torch has been passed and picked up by youth of all ages.  Join us.  We are certain that the future is bright!

UDHR Abstract from Professor Professor James Spickard, Ph.D.  Presents the history of the 1948 adoption of the Universal Declaration of Human Rights, focusing on the prior status of human rights in international law and the cultural/ideological aspects of the debates surrounding its adoption. (click here)

THE SPARK of Le Flambeau Class Discussion on UDHR topics.  Perspectives from youth in Haiti who participated in the Fall 2022 session. (click here)

To read the Universal Declaration of Human Rights (in English) (French) (in Kreyol).

We launch the 75th Anniversary of UDHR and look forward to celebrating our collective steps forward.