“We associate cremas with the best parts of growing up: communions, weddings, and the holidays. It’s a celebration drink.” 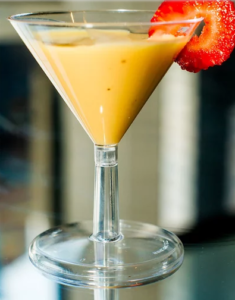 When I asked Nadege Fleurimond, chef and author of Haiti Uncovered, to describe cremas, she paused. Breaking into a wide smile, she said, “It’s like eggnog, but a million times better and without eggs. Think coquito, but creamier, flavorful, bold, and robust.”

Cremas, also spelled kremas, is the celebration drink of Haiti. Its foundation is a mix of condensed and evaporated milk, which is enhanced with cream of coconut, nutmeg, cinnamon, vanilla, and lime. Other variations include almond extract or raisins. Traditionally, the spirit that makes cremas so festive—i.e., boozy—is clairin, a clear liquor that Fleurimond says is akin to moonshine. It’s derived from the juice of Haiti’s organic, native sugarcane varieties, which is then fermented by wild yeast. Made in rural areas untouched by industrial farming practices, clairin’s flavor is complex and varies by region, time of year, and

“This is what the everyday Haitian drinks as their liquor, and this is what we use to make our cremas traditionally,” Fleurimond says. However, clairin is not readily available in the States, so other spirits are used. “In the States, people make it with rum since clairin is not common here and with Haitians, the choice of rum is almost always Barbancourt.”

The regional differences among varietals of cremas are not insignificant, as Fleurimond discovered traveling throughout the island for her cookbook, Haiti Uncovered.

“In the north of Haiti, coconut is typically not used in cremas. Southern Haitians tend to use coconut in a lot of foods, and cremas is no exception,” Fleurimond says. However, recent decades have seen some fusion of regional styles. “With the internet and more communication between towns, there is more of a culinary exchange, and you’ll see some people selling cremas made with coconut milk in the north.”

This culinary exchange is not just isolated within the island nation, but across the Atlantic to many Haitians of the diaspora. Charlene Absalon, owner of Queens-based Cremas Absalon, is part of a collective of Haitian-American entrepreneurs looking to educate others on the richness of Haiti’s food and culture. What started as a way for Absalon to learn more about Haitian cuisine turned into a business, and she created Cremas Absalon in 2013. Her cremas uses dark rum and omits the coconut for a more fluid consistency. 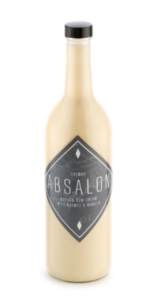 Absalon is not afraid to challenge tradition with flavors such as coffee, cinnamon, creme brûlée, and hazelnut, an ingredient not found in Haitian cuisine. “I’m taking these American recipes I collected as a child and incorporating them into Haitian flavors,” she says.

Despite initial pushback from some members of her community for not being “authentic” enough, Absalon is on a mission to redefine cremas. “I wanted to evolve what cremas should be. I call my cremas ‘new age’ because I wanted to create different flavors that pair well with the creaminess, and something that is versatile,” she says. Her version of cremas has found local and national success, so she plans to expand her home-based business to a retail location next year.

“You need that smooth, creamy texture first. For me, having coconut is crucial, because it’s what most of us know,” Fleurimond explains. “You also need a nice balance of flavor. Cremas is an alcoholic beverage, so it should be sweet but have a little kick to put you in the holiday mood.” Absalon echoed Fluerimond’s sentiment: “It’s a very rich product that is time-consuming and you have to make it right — having good cremas is a delicacy.”

Like many treasured holiday recipes, cremas is firmly embedded in memories, and its cultural significance is not to be downplayed. “We associate cremas with the best part of growing up: communions, weddings, and the holidays. It’s a celebration drink,” Fleurimond says.

For Absalon, creating cremas is not only a way to introduce the celebratory drink to the masses; it also serves as a tool to educate others beyond the one-sided narrative of Haiti portrayed in the media. “People see Haiti and they think about poverty and corruption, and I want to show that we have great food and culture, too,” she says.

Below, find Fleurimond’s recipe for ten servings of cremas: 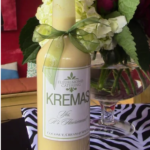